As a Christian minister, I can no longer stay

(RNS) — Elon Musk’s Twitter is crashing faster than a self-driving Tesla out for a drive on a fall day. For people of faith concerned about the health of democracy and the common good, the question now is whether or not to join the Twitter exodus.

I’ve been on social media for nearly 20 years. But with the explosion of misinformation and hate now spread by “verified” accounts on Twitter, I’ve deleted the Twitter app. As long as Musk is in charge without restraints or oversight, I’ll be away.

Trust me; the decision was not easy. Without question, Twitter is my most valuable piece of social media real estate. I got started on social media with a blog back in 2003 when few religious progressives were online. The site quickly took off with positive mentions in media outlets like The Los Angeles Times and The Washington Post.

Eventually, blogging became microblogging, and Twitter was born. Facebook is where we reconnect with high school and college friends. Twitter, for me, has been the national water cooler where connections to colleagues and legacy media have been deepened. Twitter is as important as any pulpit I’ve held.

More importantly, however, social media has been used successfully to divide Americans. Much of Russia’s interference with U.S. elections has involved using social media to exploit those divisions.

As the midterm elections neared, the National Council of Churches issued a statement noting that they were “gravely concerned about the current political climate, the violent rhetoric that has replaced honest political debate, and potential for violence during and after this year’s election.”

“This includes concerns about the possible upticks in anti-Muslim, anti-Jewish, and racist rhetoric, bigotry, and violence, as well as violent attacks against political figures because of their positions on the issues. Such attacks jeopardize our democracy and cause unnecessary harm.”

The Twitter page of Elon Musk is seen on a computer screen, April 28, 2022. RNS photo by Kit Doyle

Hate speech has soared on Twitter since Musk took over. “One racial slur was used 26,228 times in tweets and retweets in Musk’s first week, which was triple the 2022 average,” reports Axios in a new study from the Center for Countering Digital Hate.

Christianity should be, I believe, about building up the ideal of the Beloved Community.

In Ephesians 4:29, we read: “Let no evil talk come out of your mouths but only what is good for building up, as there is need, so that your words may give grace to those who hear.” Social media doesn’t lend itself to such ideals, which I myself have fallen short of too many times to count, but God is not finished with any of us yet.

My vision, however, is not shared by all. Prominent Christians like Franklin Graham use Twitter to, among other things, push hate directed at gays and lesbians. White Christian nationalists used Twitter to help organize the Jan. 6 insurrection.

Why not stay on Twitter to continue preaching a progressive understanding of the Christian faith? Musk’s vision prioritizes profit over informed dialogue. His Twitter Blue subscription service provides anyone with verification (the blue check) for a fee. That fee will promote Tweets from hateful voices and anonymous accounts over and against the rest of us.

Neo-Nazi Richard Spencer, who lost his verified status after the far-right rally in Charlottesville, recently purchased a new verified account under Musk’s scheme. Don’t be surprised to see Donald Trump and others — once kicked off Twitter for their calls of sedition and violence against democracy — rejoin the platform.

The NAACP is asking companies that advertise on Twitter to pause their efforts. Companies that have agreed, including United Airlines, Audi, Mondelez, Pfizer, and Chipotle, should be applauded. 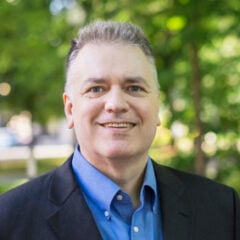 As for me, I am still looking for a Twitter alternative. What we need in the United States is a publicly owned social media outlet that fosters real conversation and sustained debate over critical issues and weeds out hate while promoting democratic values.

(Rev. Dr. Chuck Currie, Pacific University Chaplain Emeritus, is a minister in the United Church of Christ. You can find him on Instagram at @revchuckcurrie. The views expressed in this commentary do not necessarily reflect those of Religion News Service.)