Beyond Shiba Inu: 3 Stocks That Could Deliver Better Returns

Shiba Inu (CRYPTO:SHIB) has emerged as the cryptocurrency world’s latest incredible sensation. The token is up roughly 68,500,000% across 2021’s trading.

As mind-blowing as Shiba Inu’s run has been, it’s not unreasonable to wonder how much gas is still left in the tank and whether other investments could provide better returns going forward. A panel of Motley Fool contributors has identified three stocks they believe can post better long-term performance than the world-beating cryptocurrency. Read on to see why they think these companies will deliver big wins.

Keith Noonan (PubMatic): Digital advertising has already changed the world. It’s the fuel that keeps many of the internet’s biggest platforms running and posting big profits. For investors worried they missed the boat on the trend, the good news is that the overall digital-advertising revolution still has plenty of room to run — and there are exciting players in the space that are still at relatively early growth stages.

PubMatic (NASDAQ:PUBM) is a company in the fast-growing programmatic ads space. It provides a platform that enables its customers to maximize the value of advertising placements. While it’s highly unlikely that it will manage to outperform the incredible growth that the Shiba Inu’s token price has put up over the last year, I think there’s a very good chance that the ad specialist will outperform the market-crushing cryptocurrency over the next five years and beyond.

With a market cap of roughly $1.5 billion, PubMatic is still small enough to post explosive, multibagger returns, and the business is well positioned to capitalize on long-term tailwinds powering growth for its industry. PubMatic has managed to post stellar sales growth despite facing some challenges through the first half of this year, and it still expects to grow revenue at a 25% annual rate next year.

PubMatic is already profitable and trades at roughly 51.5 times this year’s expected earnings and less than seven times expected sales. In the context of the company’s impressive growth, this small-cap player looks quite cheap in what might otherwise be an expensive market, and it has the potential to serve up big wins.

A better risk/reward bet for your money

Jason Hall (Jumia Technologies): I appreciate that investors see a fun risk/reward bet with Shiba Inu. But I think Jumia Technologies (NYSE:JMIA), the African e-commerce start-up, is far more likely to help investors grow wealthy. Over the past few years, the company has gone through a lot of growing pains trying to get a foothold in the 11 countries in which it does business, and the stock price has gone on quite the roller-coaster ride: 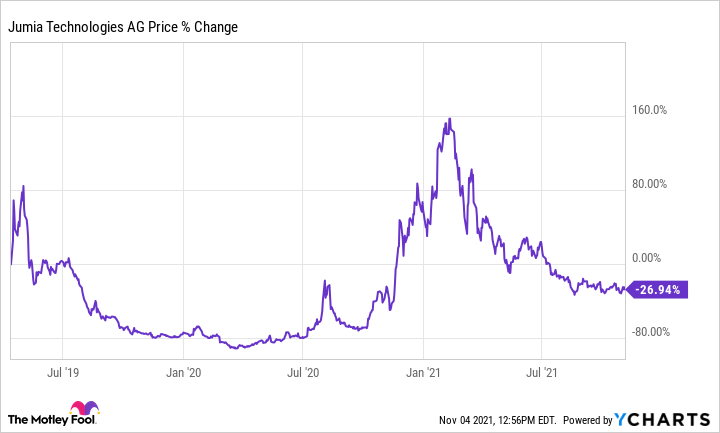 But I think management is on the right track, focusing on fulfillment for sellers, food delivery, and other services for which Jumia can be the platform other sellers can leverage to deliver their products. I also think JumiaPay, its digital-payment platform now being used off-platform in several countries, could be a huge winner in the manner of MercadoLibre‘s Mercado Pago.

The number of active users continues to grow modestly, and order volume increased 13% last quarter, the fastest rate in five years. Gross profit is on the rise, too, as its take rate trends higher — a positive sign that sellers are happy with Jumia’s services.

Now, the risks: First, Jumia is the first mover of scale in African e-commerce. In addition to the lack of infrastructure, the company faces logistical challenges that are immense and expensive. As a result, Jumia is spending a lot of money to build a business. Through the first half of 2021, its operating cash flow was negative $62 million.

With over $600 million to spend on building scale, Jumia has the resources and opportunity to be a big winner. There’s very real risk, but I think the chances of making big money are better here than with Shiba Inu.

Jamal Carnette (Magnite): Advertising technology (ad tech) stocks like Magnite (NASDAQ:MGNI) have had a volatile year and for good reason. Ad tech stocks have long-term tailwinds thanks to a shift from print media, radio, and cable television to digital. However, digital media is dominated by just a few Big Tech behemoths like Facebook and Alphabet. These two companies control more than half this market, while Amazon and Apple are rapidly investing in the space.

Alphabet and Apple are also using their immense ecosystem market share to squeeze ad techs by limiting cookies and tracking to increase user privacy. A cynical view is these actions boost their advertising market share by hurting competitors and boosting their own ad businesses. Apple’s recent shift into advertising following its privacy update (and subsequent rapid growth) is particularly noteworthy.

Against this backdrop, Magnite presents an interesting opportunity. The company was born from a merger of digital advertising equals — The Rubicon Project and Telaria, a connected TV (CTV) specialist. Later, the company acquired two more CTV companies — SpotX and SpringServe — to primarily focus on this format.

It’s early, but the shift to CTV seems prescient because Apple and Alphabet’s privacy actions don’t meaningfully impact this high-growth vertical. In the recently reported third-quarter earnings, CTV represented 38% of revenue (ex-traffic acquisition costs) and is growing at 50% on a pro forma (organic) basis.

Investors have sold off Magnite stock, and shares are 65% lower than highs established earlier this year. Investors reacted negatively to management commentary that demand appeared to be softening from advertisers suffering from supply chain disruption. In both cases, the sell-off seems extreme in relation to Magnite’s long-term opportunity in CTV advertising.

This article represents the opinion of the writer, who may disagree with the “official” recommendation position of a Motley Fool premium advisory service. We’re motley! Questioning an investing thesis — even one of our own — helps us all think critically about investing and make decisions that help us become smarter, happier, and richer.