Short sellers have had plenty to be grateful for in 2022 — falling stocks, the abrupt end of easy money and a historic energy crisis.

The combination has catapulted short-selling hedge funds, which profit from a fall in the price of a stock, centre stage, ending the largely barren run they endured in the more than decade-long bull market.

Saleur points to the opportunities thrown up by the final, wild years of the bull market, when lossmaking tech companies were lionised, Spacs boomed and the hunt for returns often veered into the reckless.

“Things were so much in fantasy; now they’re less in fantasy,” said Saleur, whose long-short energy hedge fund is up 48 per cent this year, and has profited from bets against UK hydrogen energy group ITM Power and Danish wind turbine maker Vestas.

Short selling — one of the hedge fund industry’s best-known and controversial strategies — hit high notes before the bull market, notably during the collapse of banks such as Northern Rock during the financial crisis and the demise of technology stocks in the dotcom bust just over 20 years ago.

The prospect of another golden period has emboldened short sellers to launch a string of funds. Daniel Yu and Cyrus de Weck, who founded Gotham City Research and Portsea Asset Management respectively, recently joined forces to set up a hedge fund.

Jim Chanos, best known for correctly predicting the collapse of energy group Enron two decades ago, is running a new fund for European investors, while Martin Stapleton, a respected short seller who previously worked at Gladstone, has raised money for a new fund, Perbak Capital.

At the same time, others are finally seeing their perseverance pay off.

“Recently we’ve been getting more absolute return from the short book,” said Chris Crawford, who runs a long-short hedge fund for Eric Sturdza Investments. “The reality is setting in for these companies,” he said, referring to unprofitable groups that investors rushed into during the bull market.

Higher interest rates have ratcheted up the pressure on firms whose business models rely on access to cheap debt while they also make the projected future cash flows of high-growth but unprofitable tech companies less attractive.

As well as exposing the fragility of companies with a seductive narrative but no earnings, the seismic shift in interest rates has aided short sellers in other ways.

Short sellers, who borrow shares that they then sell in the market, hold cash with their broker until they close a trade, ideally by buying back the shares at a cheaper price. Higher rates now mean that the interest earned on that cash outstrips the cost of borrowing the shares, according to Goldman Sachs data, earning them a tidy profit even before any gains on the particular bet itself.

The chilling effect of the falling stock market on retail investors, particularly those who raced into so-called meme stocks, has also been a boon.

Some managers such as D1’s Daniel Sundheim considered reducing short positions after suffering big losses in last year’s GameStop fiasco, while some switched from single stock bets to wagers against an index to curb losses. But now many feel more confident to bet against individual stocks again, say industry insiders, knowing they are less likely to be targeted by retail investors.

James Hanbury, a fund manager at Odey Asset Management, told investors, in documentation seen by the Financial Times, that this year had been by far his fund’s best since its launch in 2009 for making money on shorts. They include former meme stock AMC Entertainment and a proxy for Cathie Wood’s ARK Innovation fund.

Many short sellers suffered in the so-called everything rally during the coronavirus pandemic, when central banks unleashed more stimulus.

While this year’s 17 per cent drop in the S&P 500 and 30 per cent fall in the Nasdaq has proved a welcome relief, a declining stock market still carries dangers for short sellers whose pitch to investors rests on their ability to identify the weakest companies.

After the golden opportunity presented by the collapse in highly priced speculative stocks this year — Goldman Sachs’s non-profitable technology index is down 60 per cent in 2022 — finding new short trades has become tougher.

Jacob Mitchell, founder of Antipodes Partners, which manages around $7bn in assets, said his fund enjoyed its best six-month period for short selling profits in the first half of this year since launching seven and a half years ago. “The shorts that worked kept on working,” he said.

Managers have also had to contend with vicious bear market rallies, which can shake them out of their positions. The Nasdaq rebounded 23 per cent from mid-June to mid-August and gained 8 per cent in a week in early November.

“For the first time since this bear market began, [the] most shorted [European] names are having a proper rally and are causing major discomfort in short cash books,” Morgan Stanley’s investment bank said in a note to clients in early November seen by the Financial Times.

“You have to have nerves and be able to hold the position because the short covering is very fierce,” said Anaconda’s Saleur, referring to when short sellers scramble to buy back shares during a rally to limit losses.

While many stocks have fallen this year, their moves have increasingly become correlated with the S&P 500, meaning managers are more exposed to overall index level moves.

Correlation between the S&P 500 and its member stocks has risen sharply this year, according to Bloomberg data. That has often made life difficult for funds running so-called pairs trades — a bet on one stock rising matched with a bet on another falling, often in the same sector.

Hedge fund Sandbar recently wrote to investors to highlight “how broad-based and one-directional moves have been in markets on so many days this year”, which has been “unhelpful” for funds trading pairs. 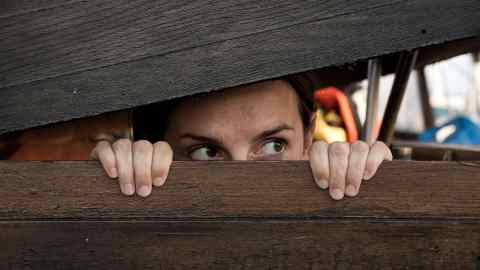 That has all served to erode short sellers’ profits in the bear market. While the Goldman Sachs Hedge Fund Short VIP index of funds’ favoured short ideas is down 11 per cent this year, yielding gains for managers, that is less than the fall in the S&P index, indicating funds did not pick the best stocks to bet against.

BlackRock star manager Alister Hibbert, one of the top-performing long-short traders, shifted his fund this year to be positioned for falling stocks but has still lost around 12.7 per cent in the period, according to people familiar with the numbers.

Eric Sturdza’s Crawford said he had recently been holding his positions for a shorter period as a way of coping with market volatility.

With plenty forecasting that 2023 will be another lacklustre one for stock markets, short sellers will be under pressure to prove they can emerge as one of the few winners.