If 2020 had been any other year, the movement in Dallas-Fort Worth’s highest-paid CEOs would have been shocking.

But in many ways, the rise and fall of chief executives’ pay packages simply mirrored the turbulence caused by the COVID-19 pandemic that has shaped everything over the last year and a half.

In the virus’ wake, a new leader rose to the top of the pack.

» See the full ranking at the end of this article.

Adair’s pay rose a whopping 16,384% to $25.7 million, even though he’s only paid $1 a year in salary. Stock options — long-term incentives that make up the biggest part of most CEO pay packages — are what caused Adair’s compensation to soar.

Companies are required to report stock options at the value when they’re granted as part of the CEO’s total pay for that year. Boards of directors use stock options that vest over time at various prices as a way to align CEO performance with the company’s share price. If the share price rises to pre-established levels, the options can be sold — giving them value beyond what’s now largely paper wealth.

“Adair will only realize income upon the exercise of these option awards and only to the extent the underlying value of Copart shares exceed the strike price,” the company said in an emailed response about Adair’s ranking. “Our board considers this calculated value to lack material meaning as it does not reflect the actual value, if any, that Adair will receive under the award.”

Adair’s new stock options vest over a three-year period and contained a clause that he couldn’t exercise them until the company’s share price closed above $106.30 for 20 consecutive trading days. Copart shares have traded above that price continuously since March 31.

Copart turned in a 40% return for shareholders last year, and the company’s revenue rose 8% to $2.2 billion.

Enter the pandemic. When virus-related supply chain problems resulted in a shortage of new vehicles available on dealership lots, demand and prices for used cars took off. That made parts hard to find, sending so-called “vehicle dismantlers” to Copart websites in search of what they needed. Salvagers are among the company’s biggest buyers.

“I used to say before 2008 that we were a recession-resistant company,” Adair told investors in a conference call that ended its 2020 fiscal year. “After 2008, I started saying that we were recession-proof. And now, after 2020, I can confidently say we are a pandemic-proof company.”

The pandemic also conspired to push perennial pay leaders at AT&T, Exxon Mobil and Tenet Healthcare down in this year’s rankings, as each of their companies faced unusual challenges.

The oil and gas industry struggled throughout 2020, although Exxon is bouncing back strong this year. Hospitals reliant on elective surgeries for revenue, such as Tenet, had to pause those procedures for a portion of 2020 and then had to convince reluctant patients it was safe again to go back to a surgical center. And AT&T, facing a mountain of debt from a series of acquisitions, found itself jettisoning parts of its business to recover.

It was such an unusual year that the highest-paid executive in Dallas-Fort Worth companies’ regulatory filings wasn’t even a CEO.

Jason Kilar, who was brought in to run AT&T’s WarnerMedia entertainment division, got a massive $52 million compensation package made up largely of stock awards to be paid out over five years. In May, AT&T struck a deal to merge WarnerMedia with Discovery — a move that ultimately could zap much of Kilar’s expected payday. Kilar has said he expects to stay with the company into next year, though Discovery CEO David Zaslav will take the helm of the merged powerhouse.

This year’s rankings point out the clear winners and losers of the pandemic-influenced year.

Take the nation’s largest homebuilder, Arlington-based D.R. Horton, which benefited from record demand for new homes. Its CEO, David Auld, saw his compensation rise 34% year-over-year to $19.1 million. That elevated him to fifth in the rankings.

And the company’s founder and executive chairman, Donald R. Horton, collected $32.5 million — more than any CEO on this year’s list.

Brain Yarbrough, senior analyst at investment firm Edward Jones, said D.R. Horton was already on strong footing entering 2020, but the increased importance people placed on their homes after being locked down and a surge in relocation to suburban and rural areas made the company’s profits shoot up.

“The demand we’ve seen over the last year is unprecedented, and the companies will tell you that,” Yarbrough said. “This even supersedes what we saw in the [2006-07] housing boom.”

Dallas-area home prices rose 18.5% year-over-year in May — the region’s biggest percentage gain ever recorded in the closely watched Corelogic Case-Shiller home price index of major cities. That gain was almost 2% above the national average.

On the opposite side of the pandemic equation is Exxon Mobil.

The Irving-based oil giant’s chief executive typically ranks in the top five in the annual ranking. In 2020, CEO Darren Woods tumbled to 10th with a pay package of $15 million. His pay fell 33% last year as Exxon suspended its executive bonus program to deal with the economic turbulence.

“Oil and gas, at the beginning of 2020, was hurt even more than most of the industries, outside of maybe retail,” said Longnecker & Associates chief operating officer Tyler Brown.

In addition to dramatically reduced travel, Russia and Saudi Arabia also put a price squeeze on oil and gas, Brown said. Woods abandoned Exxon’s $200 billion growth strategy and slashed spending. While painful last year, that put the company in a strong position to reap benefits from this year’s crude rally.

This year, however, new CEO John Stankey could do no better than fourth with a $21 million pay package. He replaced longtime CEO Randall Stephenson in 2020 and has been responsible for selling off many of the assets AT&T acquired during his predecessor’s tenure. (Stephenson, now the company’s executive chairman, received $29.1 million in compensation last year.)

Tenet Healthcare CEO Ronald Rittenmeyer, the second-highest-paid CEO in last year’s ranking, was one of 30 chief executives among the top 100 who took pay cuts. His pay declined 31% to $16 million.

But that hasn’t made Rittenmeyer immune from criticism. Striking nurses at a Tenet-owned hospital in Massachusetts regularly point to his eight-figure compensation in complaining about what they contend are staffing and personal protective equipment shortages jeopardizing patient safety. Politicians have joined in asking the Federal Trade Commission to investigate the company’s use of CARES Act money.

Rittenmeyer, 74, last week announced he will turn over CEO duties on Sept. 1 to Saum Sutaria, Tenet’s president and chief operating officer. He will remain the Farmers Branch-based company’s executive chairman through 2022.

While Tenet’s pay gap was sizable, it wasn’t close to being the widest in D-FW.

That dubious honor fell to Plano-based movie theater chain Cinemark, which chalked up a 1,150-1 ratio with its employees collecting median pay of $6,000. Significant pay gaps are common with companies like Cinemark that employ part-time and seasonal employees, but the divide deepened as COVID-19 closed theaters and workers were furloughed by the thousands.

But like Adair, there were others who got hefty pay bumps.

Most experts in executive pay say it’s too soon to tell whether 2020′s changes will extend beyond this year.

Amit Batish, marketing and content manager for research firm Equilar, said CEO pay across the nation only dropped 1% to 2% on average last year. Most companies cut salaries and bonuses instead of long-term stock awards and options, where CEOs get most of their pay, to conserve cash on hand.

“Last year was obviously an anomaly. So we imagine most of those salaries to pick up where they left off pre-pandemic,” Batish said. “No real long-term changes I would imagine at this point, but again that’s TBD at this moment.”

“When they can’t work from home and they gotta go back to the office, it’s going to be a different animal,” Yarbrough said.

He also worries that wages aren’t increasing at rates comparable to home prices.

“Over the next year to year and a half, we’re going to kind of see how this plays out. I think we’ll get a better picture of how sustainable the demand is,” Yarbrough said. “You can’t expect the demand we’ve seen over the last 12 to 16 months to continue. There’s just no way because, you know, housing prices are going up.”

Longnecker & Associates’ Brown is more optimistic. While 2020 brought unprecedented challenges, he said many boards of directors stepped up and “worked longer, harder hours than they’ve ever worked before to make sure that businesses stayed alive.”

“They are actually really trying to do a good job for the shareholders and the continuity situation of business,” he said. “I think that’s the overarching theme here.”

3: Hernandez retired in 2020, replaced by David Constable in December.

4: Kelly will become executive chairman next year, replaced by Bob Jordan on Feb. 1.

6: Zoradi plans to retire at the end of 2021, replaced by Sean Gamble.

8: Easter exited at end of 2020, replaced by Jonathan Shepko. 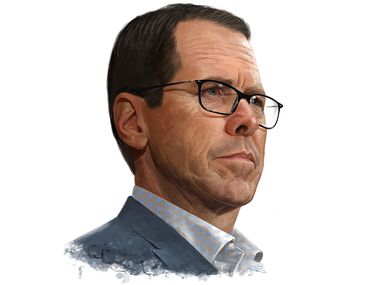