America’s flu hospitalizations are at their highest level for this time of year in more than a decade, official statistics show.

Seventeen states are already reporting ‘high’ or ‘very high’ rates of admissions to their hospitals, at levels not normally seen until late November or December.

Alabama, South Carolina and Tennessee are worst affected, with up to five admissions per 100,000 people — nearly five times the national average of 1.2 per 100,000.

Nationally, rates have risen more than three-fold over the past month alone, with experts warning it ‘certainly looks like the start’ of America’s worst flu season in at least a decade.

There have already been nearly 1.6million cases, 13,000 hospitalizations and 730 flu deaths so far this year according to official estimates.

The outbreak has arrived about six weeks early and is more severe than usual — with the virus typically appearing in late October and peaking in December or January.

The CDC said the burden of flu is the highest it’s been since the 2009 H1N1 pandemic, based on lab-confirmed cases, doctor visits, hospitalizations and deaths.

Americans are thought to be particularly at risk of severe disease this year because stay-at-home orders robbed them of exposure to healthy germs.

The above graph shows the flu hospitalization rate by week for every flu season since 2010. It reveals that admissions in 2022 are already outpacing all of these previous years, reaching their highest level in more than a decade 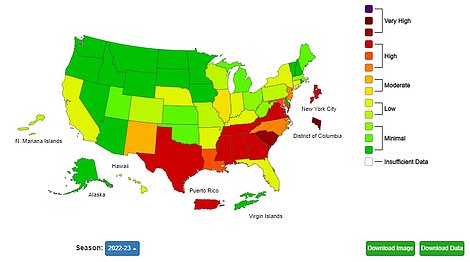 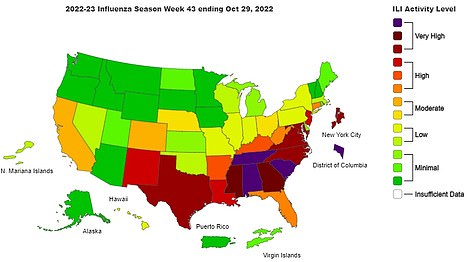 The above maps show flu-like illness activity by state in the week ending October 22 (left) and Oct 29 (right). The number of states with ‘very high’ influenza levels has surged from one two weeks ago to nine now, as the season worsens 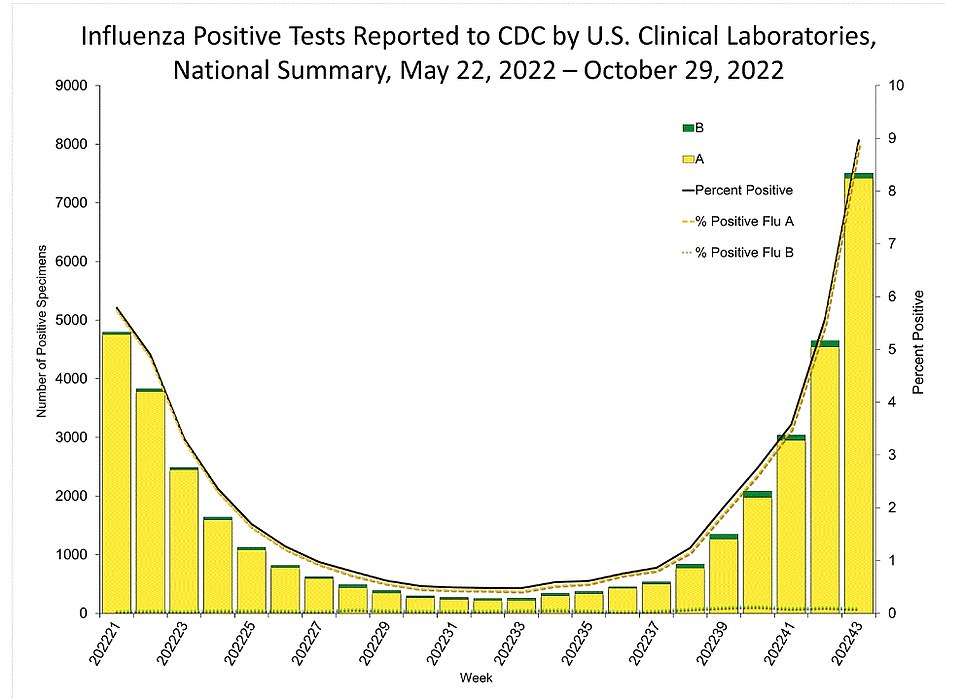 The above shows the number of positive tests for flu by week. It reveals that positive cases are rocketing after this year’s season began six weeks earlier than usual 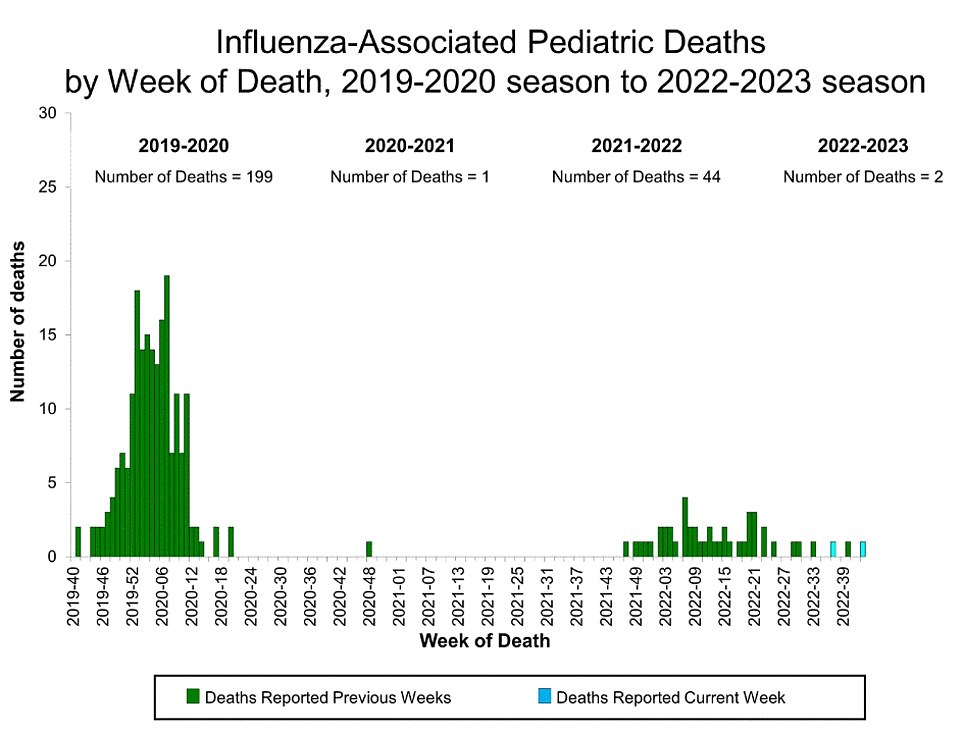 The above shows fatalities that were linkedto influenza by week among children. It shows there has been no uptick in these at present 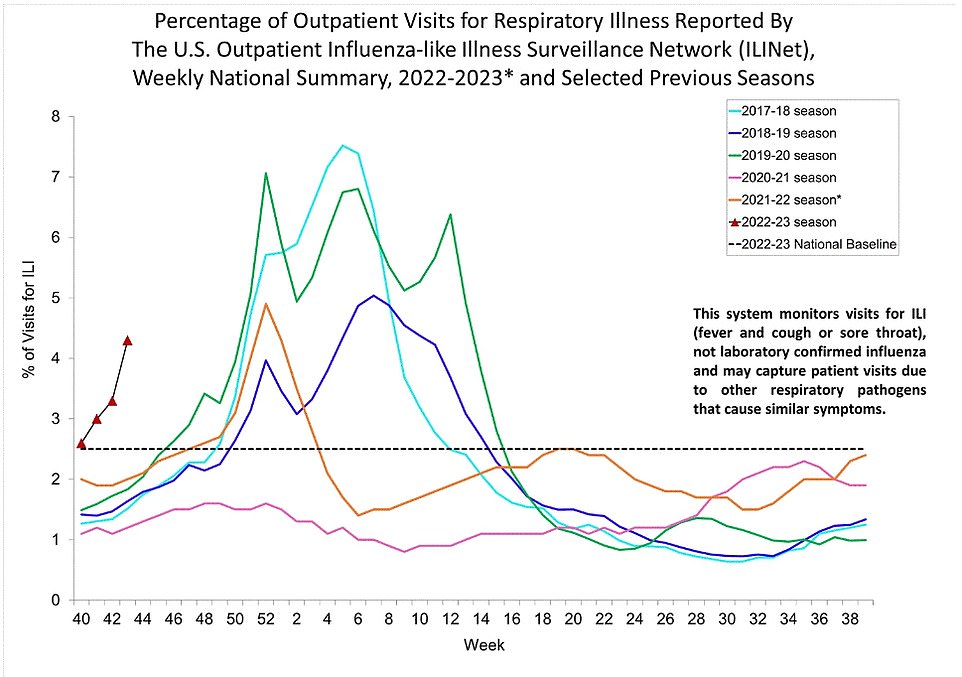 The above shows hospital admissions for respiratory-like illnesses — such as flu and RSV — by week oer 100,000 people. It reveals that this year’s are rocketing ahead of those in other years, and are the highest since the 2009 swine flu outbreak 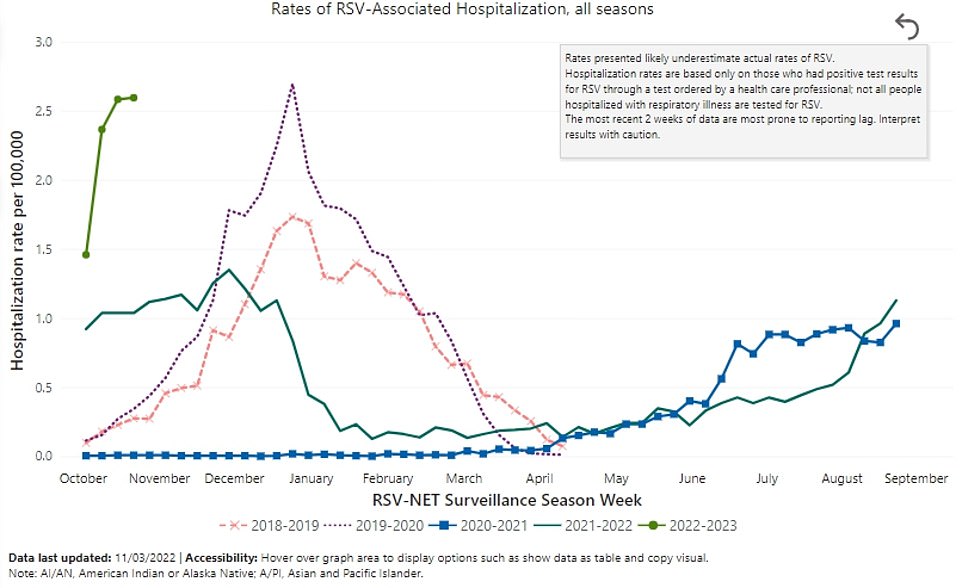 The above shows rates of RSV-related hospitalizations by week. This common disease is being linked to more illnesses among very young children, after stay-at-home orders meant they were not exposed to good germs to build their immune system

Children’s hospitals are also feeling the brunt of the surge in flu and other respiratory viruses this year.

Three quarters of children’s hospital beds are now full nationwide, while in five states — Rhode Island, Arizona, Maine, Minnesota and Delaware — as many as nine in ten beds are full.

Last week Dr Scott Gottlieb, the former head of the Food and Drug Administration (FDA), warned this year’s winter would be ‘more aggressive’ than usual because immunity to seasonal bugs is so low.

‘We’re seeing a peak in cases right now,’ he said. ‘This is not unlike the season last year, where we also saw an early peak. 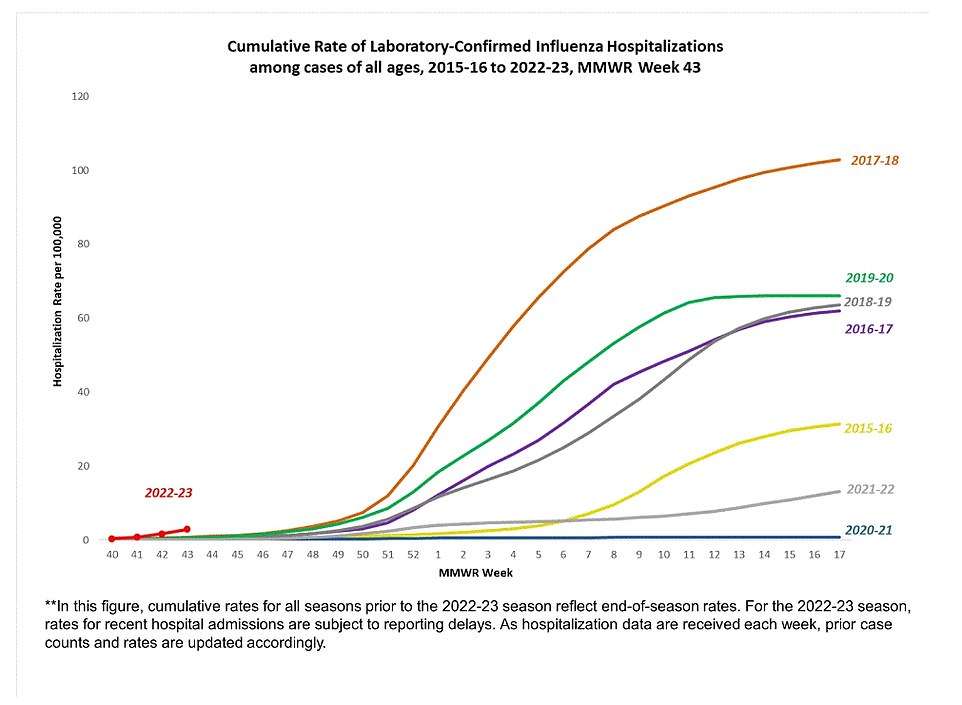 This graph shows the cumulative rate of lab-confirmed hospitalizations with the flu by week. It reveals that this year’s rate is already above that of any other year since 2015’s flu season 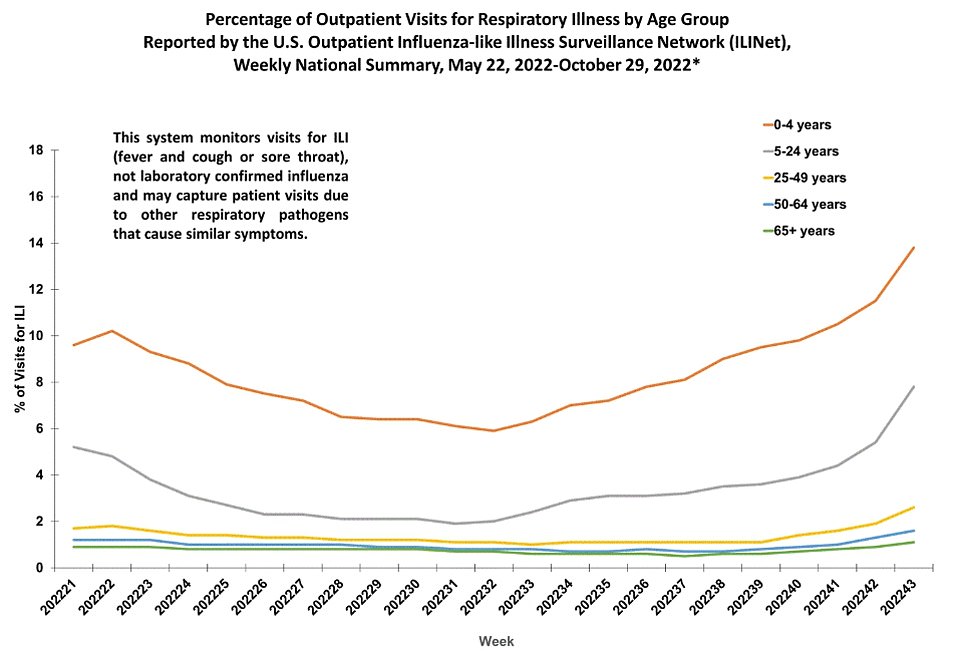 This breaks down admissions for respiratory like illnbess by age group. It reveals that those aged 0 to 4 years are most likely to be taken to hospital with the disease

Pfizer is testing a new vaccine that inoculates against Covid and flu amid sluggish uptake of both shots.

The first patient was given the two-in-one vaccine this week as clinical trials got underway. In total 180 patients will be recruited for the study.

Pfizer’s new shot targets the Omicron variant and its offshoots as well as four strains of influenza.

Rival vaccine-maker Moderna is also testing a vaccine targeting Covid and flu, as well a triple-shot that also immunizes against RSV.

None are expected to be ready for this year’s flu season, which is already the worst in over a decade piling pressure on hospitals.

Uptake of the updated bivalent booster vaccine is lagging in the US, with just a handful of Americans who are eligible coming forward.

The numbers coming forward for the flu vaccine are also down, with 18 per cent fewer jabbed now than this time last year.

Pfizer cashed in on the Covid pandemic vaccine rush, making $21.98billion in profits last year. Only Novartis — behind many cancer treatments — made more.

The pharma giant is also working on an RSV-fighting jab, which it revealed yesterday was 80 per cent effective in infants.

‘Not only is flu early, it also looks very severe,’ he said.

‘This is not just a preview of coming attractions.

‘We’re already starting to see this movie. I would call it a scary movie.’

The top expert warned it ‘certainly looks like the start of what could be the worst flu season in 13 years’.

The CDC monitors flu cases, hospitalizations and deaths across the US.

In their latest report — up to the week ending October 29 —, a total of 1.2 per 100,000 people were being admitted to hospitals with flu-like illness.

This was six-fold higher for this time of year than at any other point over the past ten years.

They calculate the pressure by comparing the average rate of admissions outside of a flu season, to the rate in the current week.

A total of nine states now have ‘very high’ activity, they said.

For comparison, states in the western US had fairly low levels — but in the eastern US they also appeared to be rising.

Data also showed that RSV hospitalizations were approaching their highest level since 2016.

Data showed there were 2.6 admissions per 100,000 people linked to this common disease last week.

Data showed about four in every 1,000 babies under six months old have been hospitalized with RSV, alongside one in every 1,000 children between one and two years old.

More than three quarters of pediatric hospital beds and ICU beds are currently in use nationwide, compared to an average of about two-thirds full over the past two years.

Seventeen states have less than one in five beds available, data from the Department of Health and Human Services shows.

Five of them are more than 90 per cent full: Rhode Island, Arizona, Maine, Minnesota and Delaware, along with Washington, DC.

How to Watch Lakers-Bucks Game On Friday

How to Watch Lakers-Bucks Game On Friday