SAN DIEGO — A unique and unwieldy strain of anxiety settled into Section 111, Row 36 at Petco Park on Wednesday afternoon. It was mixed with anticipation and pride and something more difficult to define, something that felt contradictory and borderline impossible, like imprisoned joy.

A.J. Nola arrived in Section 111 for Game 2 of the National League Championship Series wearing the jersey of his son, Padres catcher Austin Nola, underneath the jersey of his son, Phillies starting pitcher Aaron Nola. His brown Padres cap seemed intended to provide some semblance of balance. Stacie Nola, the players’ mother, went with a navy blue outfit that betrayed no affinity.

We’ve got you covered this October with the latest schedules, results, news and analysis.

Aaron was starting on the mound for the Phillies; Austin was catching for the Padres, batting ninth. The Nolas were set to become the first brothers to face each other as hitter and pitcher in postseason history. They’re the sixth pair of brothers to play against each other in the postseason, the first since the Alomars in 1996.

It sounds like every crazed sports parent’s wildest fantasy — and yet what transpired Wednesday afternoon was roughly four hours of two people trying their hardest to comport themselves in a way that would betray no favoritism or even emotion. It sounds like a storybook but it looked a little different up close.

AUSTIN IS SCHEDULED to hit third in the bottom half of the third inning, and so a cameraman and Fox reporter Ken Rosenthal arrive in Section 111 to capture the parents’ take on history. A.J. does all the talking, an arrangement that was made before the game. “I already told him I wasn’t talking,” Stacie says, to which A.J. replies, “She usually kicks me if I say something I shouldn’t. I’ll feel a little tap, but I didn’t feel one today, so I guess that’s good.”

With two outs in the bottom of the inning, Austin walked from the on-deck circle to the batter’s box. The cheers he heard from the sellout crowd might have been the loudest of his career. As he took a practice swing and a deep breath, there was no exchange of looks, or tips of the cap, or even any apparent eye contact. Austin was just another uniform in the batter’s box. Aaron was just another uniform on the mound. Austin took a cutter for a strike and then tapped a 95-mph fastball softly to third base for the final out of the inning. Neither Stacie nor A.J. clapped for Aaron or showed any disappointment for Austin. They didn’t really know what to do.

“I don’t think they even looked at each other,” A.J. says to Stacie, who says she isn’t surprised. They both shrug a little. Pat McElroy, the father of Austin’s wife, Michelle, leans over and says, “They’re both laser-focused. That’s just who they are.”

When you face your brother in the #postseason. pic.twitter.com/D0KTBudbkP

McElroy is a man with no split loyalties. He’s wearing a Padres shirt and a Padres cap with “Nola 26” inscribed above the left ear. It would be difficult to find someone who is enjoying the Padres’ postseason run more than Pat McElroy, or someone who has more fun showing it. He waves his Padres towel from starting with the first pitch and constantly puts his hands together and raises them to the sky, like a preacher, willing the Padres toward victory.

An inning later, Aaron gets a strikeout on a curveball after three straight fastballs and a strikeout on a fastball after three straight curveballs. A.J., who called Aaron’s pitches through his freshman year of high school, says, “I was just asking Stacie, ‘Where’s the fastball?’ and there it was.” The Phillies are up 4-2, and other than two solo homers, Aaron looks to be in control. “When he’s on, I love watching him pitch because of the way he can command his way through the lineup,” A.J. says. “And today he is on.”

HA-SEONG KIM LED OFF the bottom of the fifth with a single, and A.J. and Stacie stood as Austin walked toward the plate. Stacie was recording her sons on her phone, and the crowd began chanting, “Austin! Austin!” — a wild development for a guy who spent seven years in the minor leagues and made a position switch from shortstop to catcher more than midway through. Neither parent chanted (McElroy did, hard). A.J. leaned forward every time Aaron began his motion and recoiled a bit every time a pitch crossed the plate. A Fox cameraman stood two rows below them, beaming their angst into the world.

On an 0-2 pitch, with Kim running from first, Austin crushed a line-drive single to right-center, and Kim kept running until he scored. The noise, already teeth-shattering, rose to a level that threatened to loosen the ballpark’s pillars. McElroy is high-fiving everyone in sight (eventually, even my turn arrives). Meanwhile, on the field, Austin stands at first base and pumps his fist in a muted, almost apologetic, celebration. Aaron catches a new ball from the home-plate umpire and ascends the mound, never so much as glancing Austin’s way.

“Of course you always root for your brother and want him to do well,” Austin says afterward. “It has been strange. But we talked about this beforehand. It was understood between us that this is competitive. There’s no empathy here. We both want to win. … Now that it’s the postseason, and it’s all-out — bottom line, I hope you do well next year, you know?”

A.J. and Stacie are most proud of how Aaron, who spent just a year in the minors before becoming one of the National League’s best and most reliable starters, was always Austin’s biggest booster, and how Austin never begrudged Aaron his near-immediate success.

But there’s no manual for a situation like this, no one to consult for advice. One of their sons is on his way to blowing a four-run lead in an LCS game, which is not good news, but their other son is a big reason why, which is good news. And when they cheer Austin’s RBI single, as they were, are they by definition rooting against Aaron? “I think we need to sit down and talk as a family about how we handle it,” Austin says. “It should be fun. Everyone should enjoy it. We enjoy it, and I hope they do, too.”

Austin’s hit started a five-run fifth inning that would prove to be the end of Aaron’s day. Hit after hit, the noise rising with each one — six earned runs in all. When Brandon Drury‘s two-run single off reliever Brad Hand put the Padres ahead 6-4, the Padres’ fan sitting next to Stacie — a guy whose alcohol intake might have led him to believe he was closer to the Nola family than any stranger should have concluded — reached out to give Stacie a hug. Clapping stiffly now that Aaron was out of the game, the tension tight at the corners of her mouth, she deftly avoided his grasp.

Shortly after Aaron left the game, A.J. stood up, stretched his arms and worked his way down the aisle. His decision to go for a walk could have been precipitated by a number of factors — wildly vacillating emotions, McElroy’s good-natured teasing and Padre exuberance, hunger — but he was gone for more than 20 minutes. He returned with a tri-tip sandwich, a bag of chips and his jerseys switched. With Aaron no longer part of the proceedings, Austin’s jersey was featured on the outside and Aaron’s took its place underneath. McElroy thought it was hilarious, but A.J. remained stoic. It was just part of the plan.

IN THE SIXTH INNING, Stacie smiles. “That was intense for a while,” Stacie says. “It’s better now. I think I can relax.” A.J. taps the spot where the two jerseys — Austin over Aaron — cover his heart. “I was a bit wound up there,” he says. “Now I can just enjoy the game.”

Austin leads off in the bottom of the sixth, and another, less forceful chant starts up before he flies out to start the sixth inning. I ask A.J. if he ever could have conceived of sitting at a playoff game and hearing Austin’s name chanted throughout a packed stadium. “Never,” he says. “To go through season after season the way he did, knowing how hard it is to get a spot with so much talent out there…” Here he trails off and looks out at the field to gather himself. “I’m just so thankful to be here, to get this experience while I’m still able to.”

McElroy, perhaps as a means of atoning for his afternoon of celebrations, shows me photos of Aaron and Austin from Monday morning at Austin’s house. Aaron is holding Vinny, Austin and Michelle’s 2½-year-old and Aaron’s godson. Out of the picture are Michelle and their five-week-old daughter, Lucia. “This is what it’s about,” McElroy says. “Family. Family. Family.” 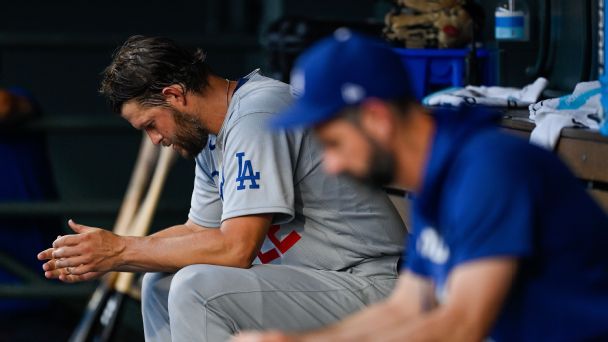 It’s about this time that someone sends A.J. a text — there are so many texts — with a screenshot of A.J. on the telecast and the caption, “His sperm could sell for millions.” It provides Stacie and A.J. their first true laugh of the game.

Manny Machado homers to lead off the seventh, and by now I’ve lost count of the high-fives. When Austin leads off the bottom of the eighth, the energy in the building sapped by the 92-degree temperature and the game’s manic activity, McElroy takes off his Padres cap and demands I rub the “Nola 26” on the side for good luck. “Bayou Magic,” he calls it. Austin grounds out.

Three outs to go. Josh Hader jogs in from the bullpen, his hair a step or two behind, and McElroy begins an exuberant countdown of outs. It’s quick, and the Padres win 8-5 to even the series at a game apiece as the two teams — and all the Nolas and McElroys — head for Philadelphia for Game 3 on Friday. After the third out, McElroy — the one unencumbered man in the group — bounces and dances and hugs. He looks at Stacie, a woman who is clearly drained by the noise and the heat and the weird brand of tension that settled into Section 111, Row 36, and says, “You won. We won.”

True, and not true. Stacie says something I can’t hear, but the look on her face — and A.J.’s — is easy to read. They’re two things at once: thrilled that it happened, happy that it’s over.

We finally found something Jalen Hurts isn’t amazing at!

Fear of Public Places Is Common in Adults With Epilepsy