Coronavirus disease 2019 (COVID-19) vaccines currently rolling out globally have shown strong protective efficacy against SARS-CoV-2 infection and symptomatic COVID-19. However, there is accumulating evidence suggesting that the vaccines may not always induce sterilizing immunity against infections caused by novel viral variants. Although multiple vaccine breakthrough infections have been identified in many countries, it is still uncertain whether these cases are infectious enough to transmit the virus to others. In this context, it is generally assumed that vaccine-induced reduction in viral replication and subsequent viral load account for faster clearance of infection and lesser possibility of viral transmission. 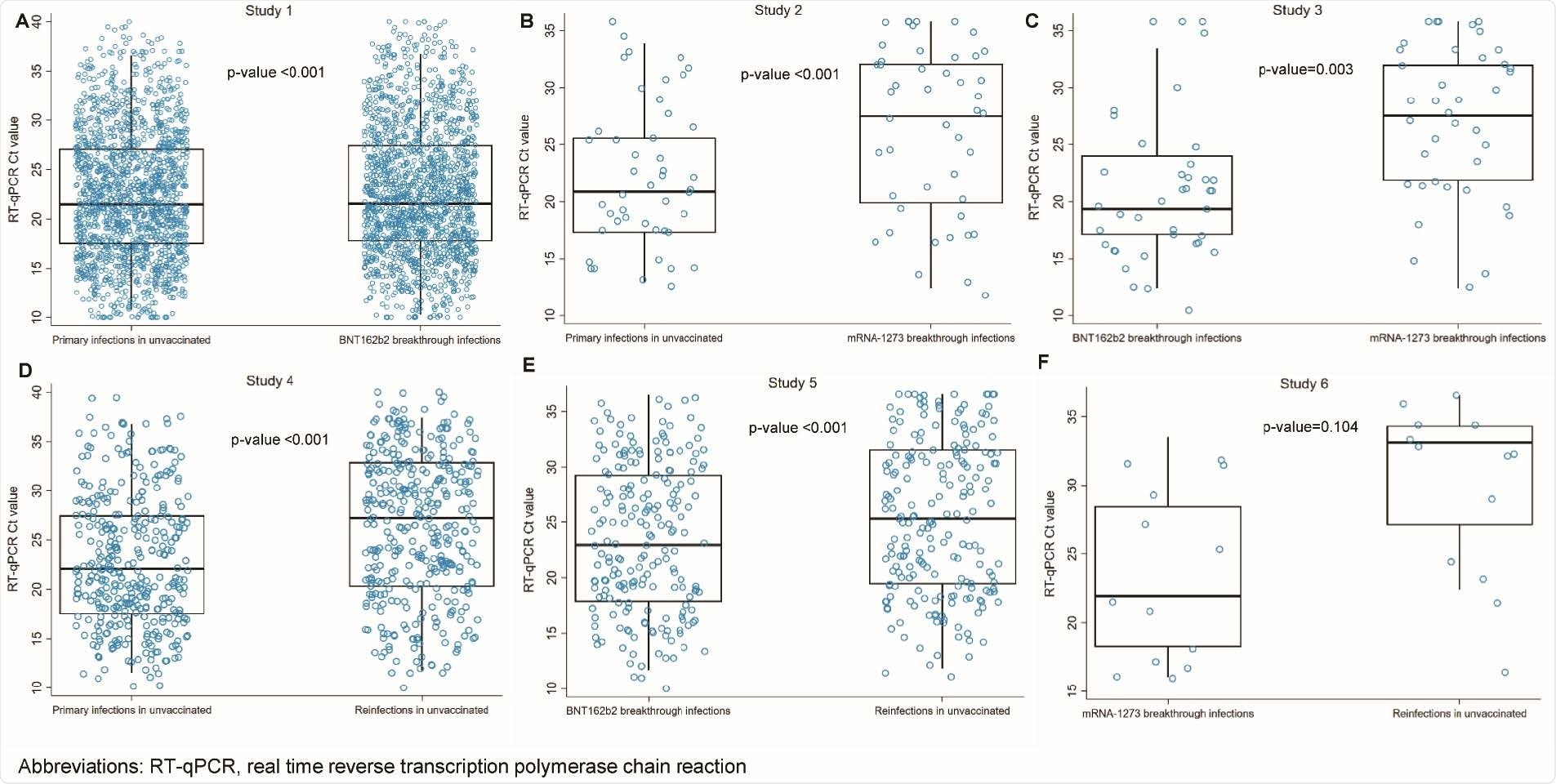 RT-qPCR Ct values in the randomly diagnosed (asymptomatic) SARS-CoV-2 infections. Distribution of these Ct values in the six pairwise comparisons between primary infections in unvaccinated individuals, reinfections in unvaccinated individuals, BNT162b2-vaccine breakthrough infections, and mRNA-1273-vaccine breakthrough infections. A randomly diagnosed infection was defined as an RT-qPCR-positive test conducted with no prior reason to suspect infection and no reported presence of symptoms compatible with a respiratory tract infection. That is, the RT-qPCR test was conducted as part of a survey (random testing campaigns), for routine healthcare testing, for pre-travel requirement, or at port of entry upon arrival in Qatar. Boxplots center lines indicate the median Ct values, box limits indicate the 25% and 75% quartiles, and whiskers indicate maximum and minimum observations within 1.5 of interquartile range.

It is empirically assumed that viral load is directly proportional to the volume of infectious viruses. Estimations made in the study from this assumption revealed that breakthrough infections in vaccinated or previously infected individuals had significantly lower infectiousness compared to primary infections in unvaccinated individuals.

The study demonstrates that individuals having immunity against SARS-CoV-2 from vaccination or prior infection are more likely to have lower viral loads upon infection/reinfection. In addition, since viral load is directly correlated with the amount of culturable or infectious viruses, the study findings indicate that the risk of viral transmission from vaccinated or previously infected individuals is relatively lower than that from unvaccinated individuals with primary infection.

Overall, the study highlights that COVID-19 vaccines are effective in reducing the rate of person-to-person viral transmission, in addition to preventing primary SARS-CoV-2 infections.

medRxiv publishes preliminary scientific reports that are not peer-reviewed and, therefore, should not be regarded as conclusive, guide clinical practice/health-related behavior, or treated as established information