• The Rams’ nightmare continues: As if the injury to Cooper Kupp wasn’t enough, L.A. then went and lost wideout Allen Robinson II to a season-ending foot injury and will be without Aaron Donald for a few weeks as he recovers from an ankle injury.

• Kansas City in a class of its own: The Chiefs remain the toughest offense in the NFL to stop in the second half of games and are the only team in the NFL with a second-half drive success rate over 50%.

The Dallas Cowboys keep coming: With a win over the New York Giants on Thanksgiving, the Cowboys are now 8-3 and sit in second place in the NFC East. The Cowboys earned their best team receiving grade of the campaign (91.0), with tight end Dalton Schultz scoring twice and CeeDee Lamb racking up 124 receiving yards.

The Jacksonville Jaguars won through the air, and the Baltimore Ravens paid for their mistakes: The Jaguars returned from their bye to beat the Baltimore Ravens 28-27, a shock victory for Doug Pederson’s men. But while the Jags generated their best team offense grade of the year (73.7), their run game mustered just 38 rushing yards and generated a dismal -0.597 EPA per play. The Ravens dropped three would-be touchdown passes in the end zone, costing them the game and ending their four-game winning streak.

A night to remember for the Las Vegas Raiders: In their overtime win over the Seattle Seahawks, the Raiders produced their second-best team offense grade (82.7) and their best team passing grade (81.9) of the year. Running back Josh Jacobs earned his second-best PFF grade of the season (91.4), rushing for 229 yards and two touchdowns, including the 86-yard game-winner in overtime.

Geno Smith took a step back: The Seahawks quarterback did not have his best game against the Raiders. His interception in the second quarter led to a Raiders score, while his third-quarter fumble ended a long drive that could have won the game.

The Jets have been wildly inconsistent on offense this season, but they seemed to find a spark with quarterback Mike White under center. The fifth-year signal-caller went 22-of-28 for 315 yards and three touchdowns, and Zach Wilson’s numbers have come nowhere near that this season.

The Jets field one of the best defenses in the league and took a step forward on offense in Week 12. They move up four spots in our power rankings.

With three divisional games coming up — one against the 10-1 Philadelphia Eagles and two against the rising Washington Commanders — the Giants could easily fall to 7-7 and watch their playoff hopes diminish. 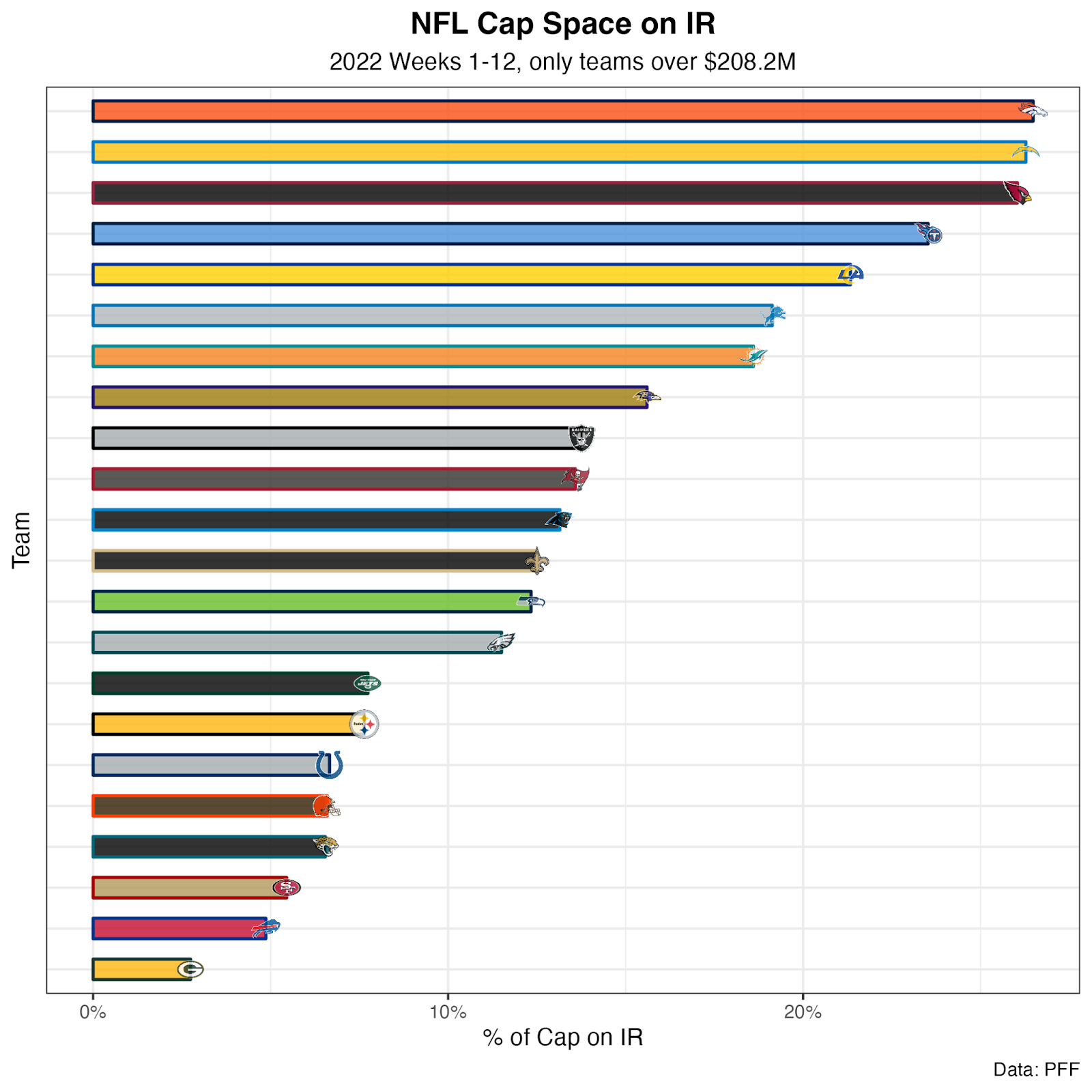 Buccaneers guard Tristan Wirfs is also expected to miss a few weeks with a high-ankle sprain. Wirfs is the league’s second-most-valuable tackle in terms of WAR (0.255), behind only Andrew Thomas of the Giants.

The Rams’ nightmare continues: As if the injury to Cooper Kupp wasn’t enough, L.A. went and lost wideout Allen Robinson II to a season-ending foot injury and will be without Aaron Donald for a few weeks as he recovers from an ankle injury. Robinson’s 0.217 WAR puts him in the top 50 among wide receivers, while Donald’s 0.506 WAR is well above the next closest interior defender. 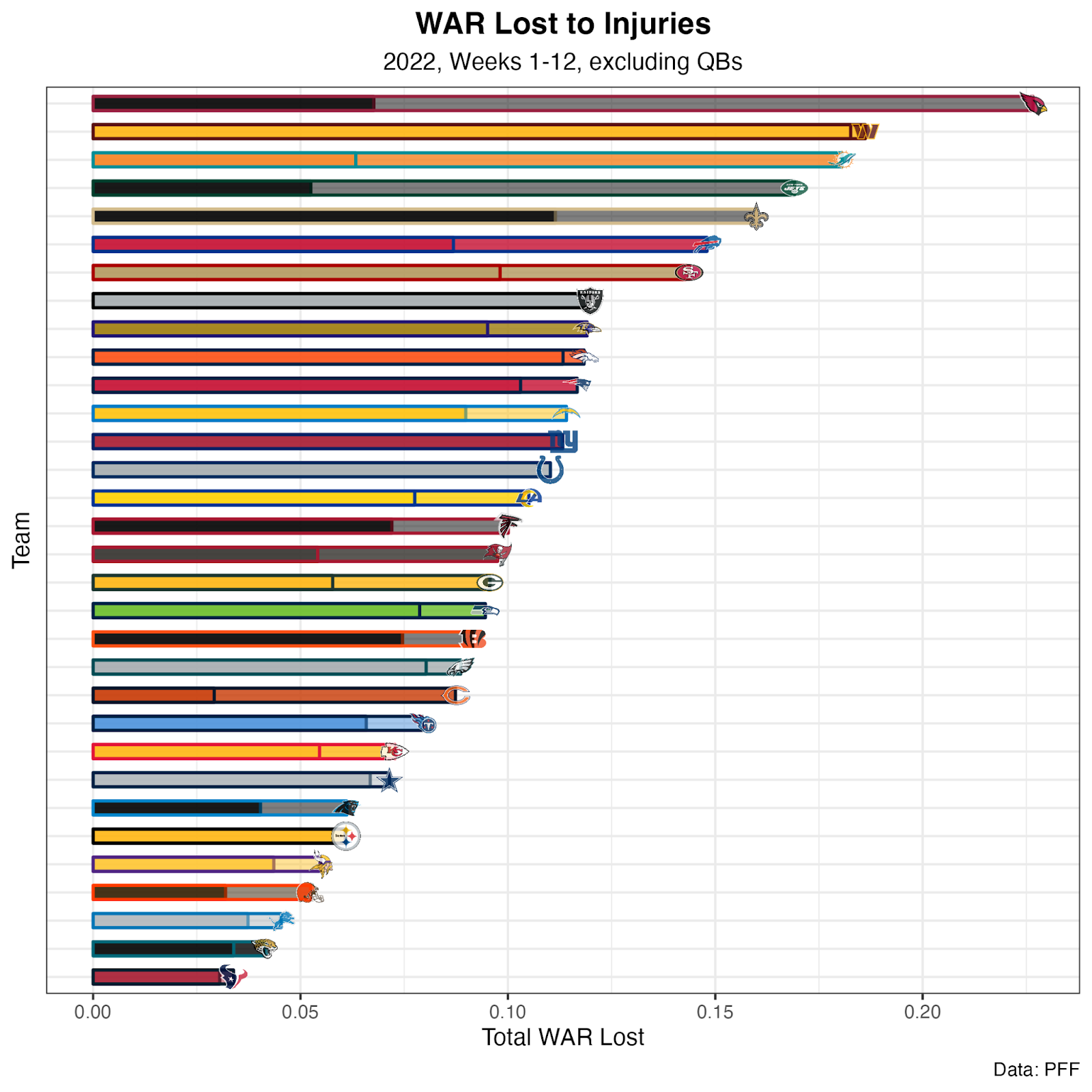 Tough luck for the Buffalo Bills: Von Miller — the seventh-most-valuable edge rusher in the league, according to PFF WAR (0.213) — is the latest Bills defender to suffer a significant injury. Gregory Rousseau and Ed Oliver will have to step up in his absence. 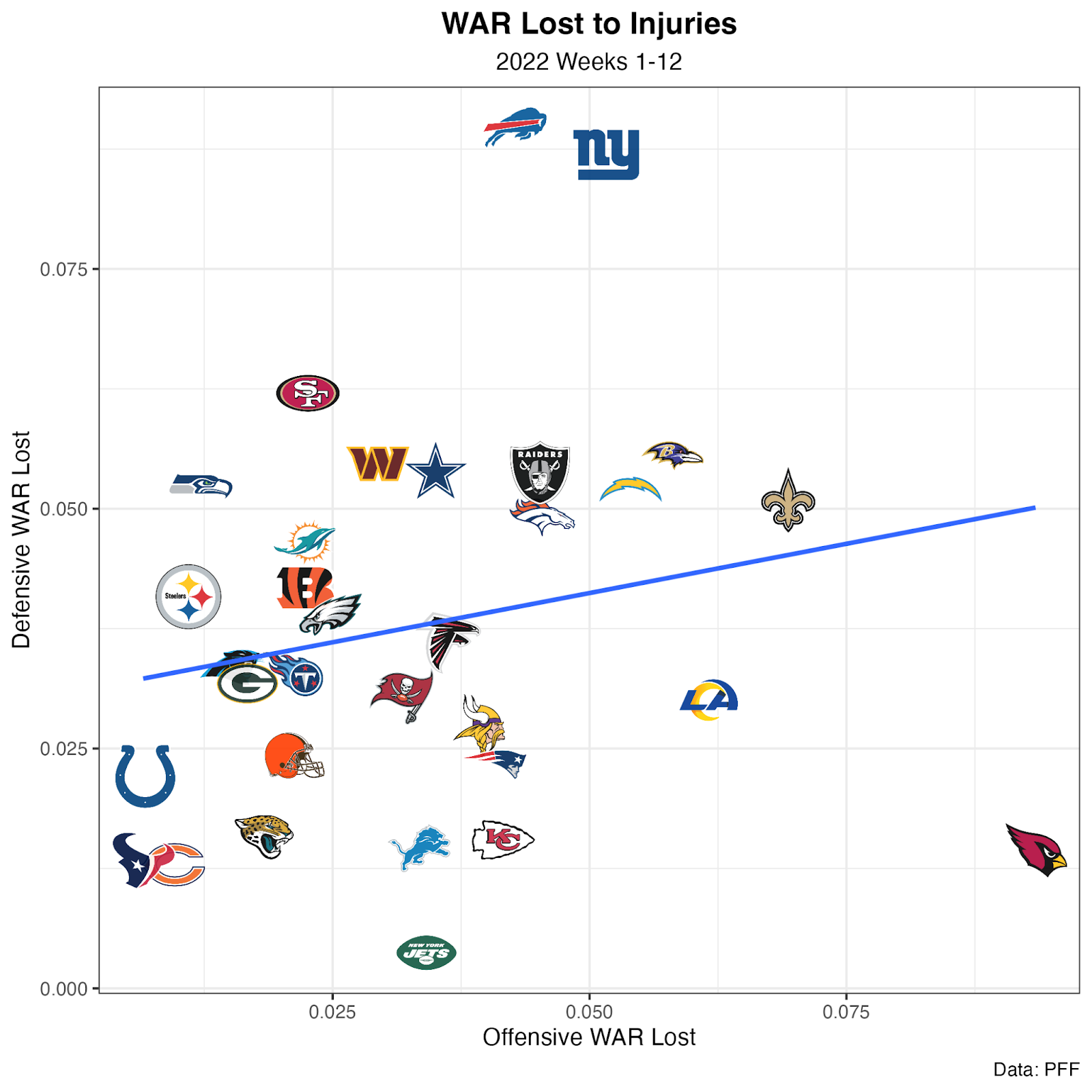 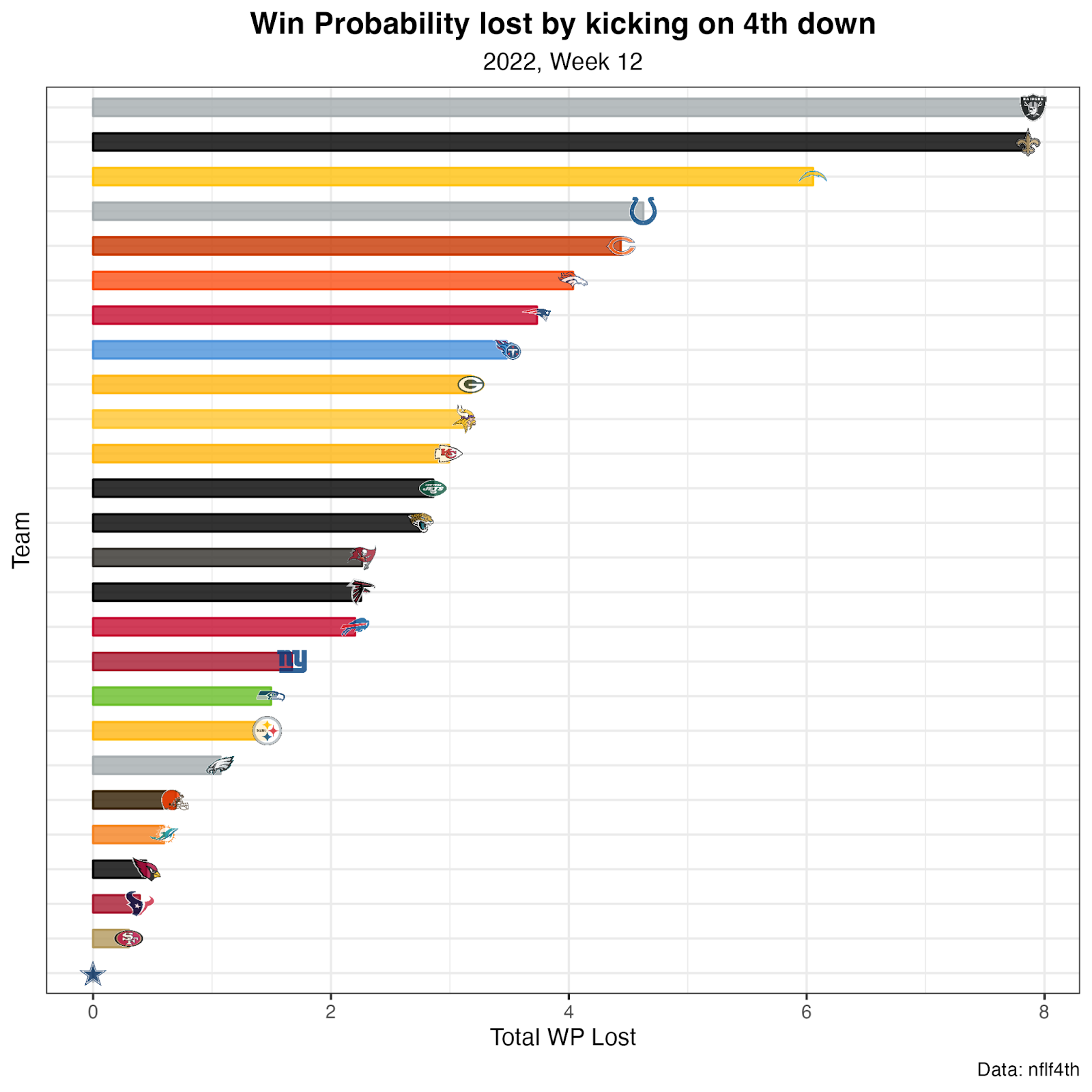 Raiders stuck to their guns: Despite losing nearly 8 win probability points due to kicking on fourth down, the Raiders were still able to win against the Seahawks, who were far more efficient in their fourth-down decision-making. 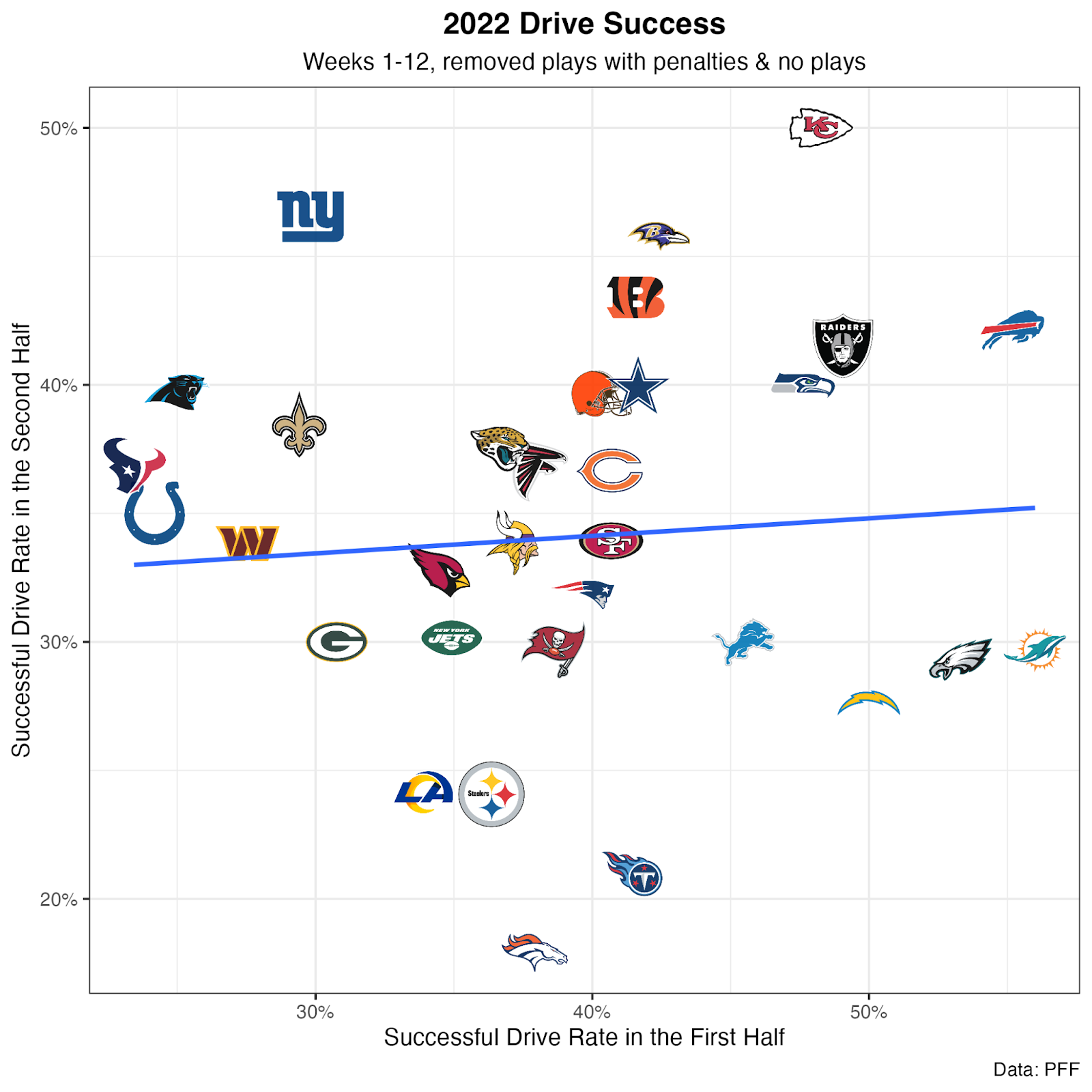 Kansas City is in a class of its own: The Chiefs remain the toughest offense in the NFL to stop in the second half of games and are the only team in the NFL with a second-half drive success rate over 50%. Andy Reid’s and Patrick Mahomes’ ability to make halftime adjustments keeps the offense as one of the best in the NFL and a tough opponent to stop.

Tennessee Titans are slowing down: The Titans have struggled in the second half of games, posting the second-lowest second-half drive success rate of any team this season. While Mike Vrabel’s opening-script success has been well-documented for a while now, he needs to figure out the halftime adjustments before the playoffs roll around.

Right now, Tenessee’s game plan seems to be “start fast and lean on Derrick Henry for the rest of the game.” When that hasn’t worked, they’ve had to crawl back into games, which is tough for them to overcome, given their injuries along the offensive line and the lack of talent at their skill positions. 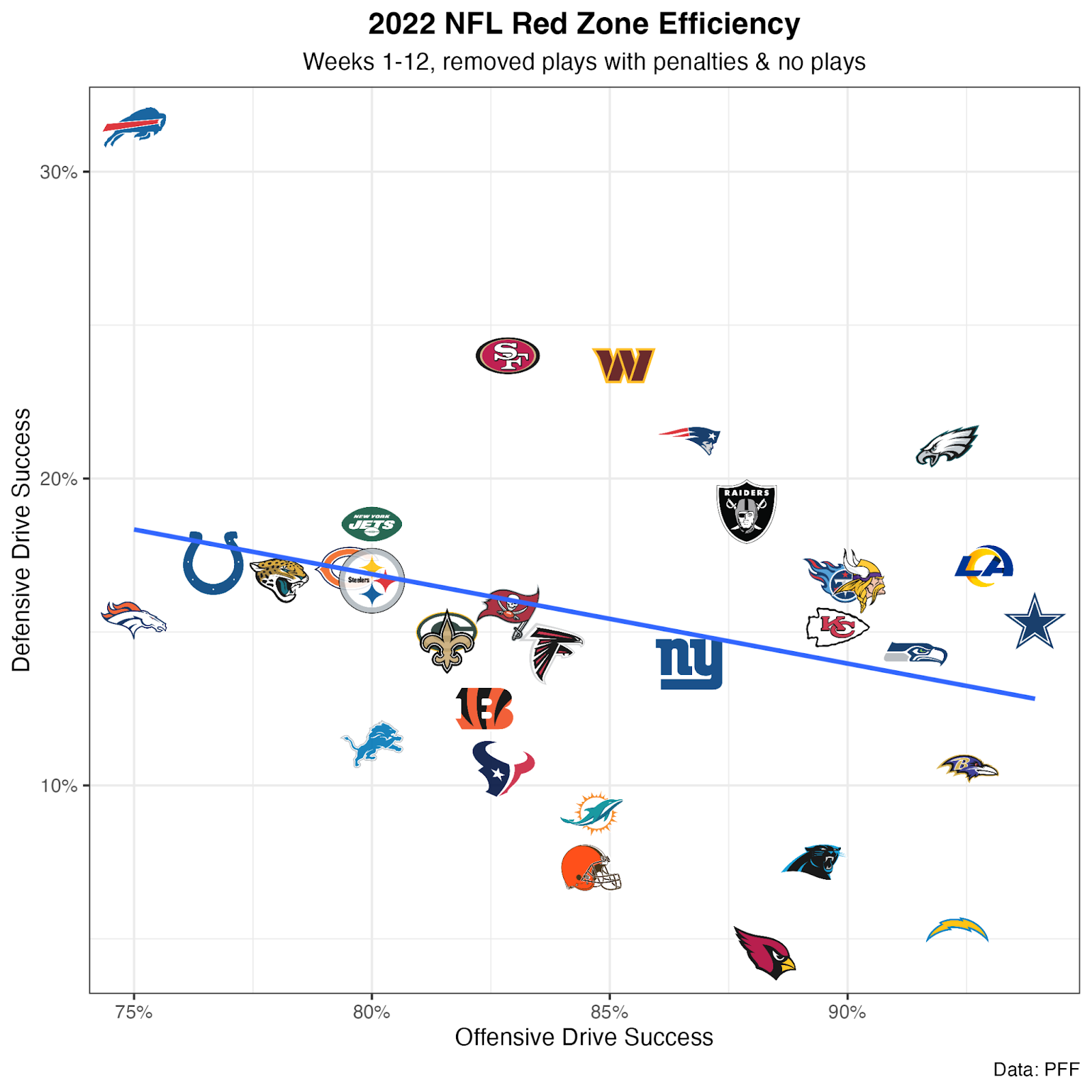 The best and worst in the red zone: The Bears stopped both of the Jets’ red-zone drives this week, and they were the only team in the NFL to prevent a score on all of their opponent’s red-zone drives. On the other hand, the Browns gave up a touchdown on all five of the Buccaneers’ red-zone drives.

What could have been for the New York Giants: The Giants defense has been unable to stop teams in the red zone for two straight weeks and has now allowed their opponents to score on a little over 60% of their red-zone drives.

However, they scored on 60% of their red-zone drives against the Cowboys in Week 12. If they had stopped the Cowboys from scoring in the red zone, they might have come out with a win.

Titans need to figure it out: The Titans had nine drives in the red zone this week and scored on none of them.

Miami dismisses Josh Gattis as OC after one season

Miami dismisses Josh Gattis as OC after one season