Exercise ‘intolerance’ should be considered an official symptom of long Covid, scientists say.

A review of existing studies found the condition — which is still not fully understood — can rob people of the equivalent of a decade’s worth of physical fitness.

The finding adds to a long list of symptoms associated with long Covid — the name for signs of illness that linger months after a Coronavirus infection.

Previous studies have found headaches, fatigue and brain fog to be the most common ailments, but anecdotally people say they also struggle to exercise.

Working out if long Covid is the true culprit for these problems has proven tricky, given how commonplace these symptoms are.

Professor Matthew Durstenfeld, a cardiologist at the University of California in San Francisco, who led the new review, said there was definitely ‘something going on’.

His team looked at endurance capacity in people with long Covid and compared them to people of similar ages who recovered from the virus.

They found long Covid sufferers performed worse, and had the stamina of someone a decade younger.

CDC data shows the percentage of people reporting symptoms after a positive Covid test. The green, purple, turquoise and orange bars show the people who would be classed as having long Covid, as symptoms are persisting after 12 weeks. The most commonly reported lasting symptoms are headaches, runny nose, loss of smell, taste or hair and sore throat 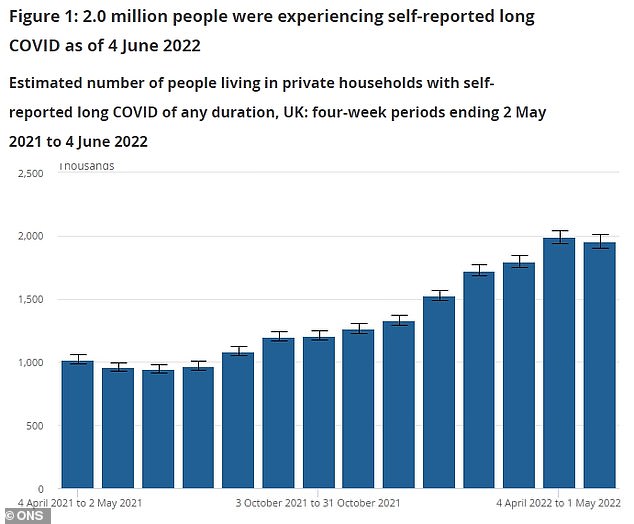 The estimated number of people in the UK with self-reported long Covid has grown over the months, reaching a peak during April 2022 of 1,988

What is long Covid?

Long Covid is an informal term, used to describe ongoing symptoms following a Covid infection that go on longer than four weeks, according to the ONS.

A dizzying array of symptoms have been attributed to long Covid, including:

There is no cure for the condition, though treatments can ease symptoms.

Forty-year-olds with long Covid ran or cycled like ‘someone in their fifties’, Professor Durstenfeld told The Washington Post.

An estimated 16million Americans and 2million Britons have the condition – but medics are still split over the true number.

The new analysis focused on 464 people with long Covid and 359 without, aged between 39 and 56, involved in nine existing trials.

All participants undertook a test of their exercise capacity and heart rate on a treadmill or exercise bike.

Generally, those who had recovered from Covid could withstand a normal amount of exercise for their age.

Their heart rates could not reach the average rate expected during exercise, which would slow blood flow around the body.

And their muscles took less oxygen from the bloodstream than they usually would, which would hinder muscle contraction. Some people also hyperventilated.

Professor Durstenfeld said these are not normal reactions after someone has become out of shape after being ill.

Writing in the study, published in JAMA Network Open, the researchers described the symptom as ‘exertional intolerance’.

Dr David Systrom, a lung expert at Brigham and Women’s Hospital in Boston, who was not involved with the study, reflected that individuals with long Covid may undergo molecular changes in their muscles, nerves and blood vessels.

This means their bodies may become less tolerant to the physical demands of exercise, even if they have nothing abnormal in their lungs or hearts.

The Centers for Disease Control and Prevention (CDC) reported that around eight percent of American adults are suffering from a form of long Covid.

It is near impossible to tell what chance a person has of developing it after Covid infection because of the massive underreporting of cases that has occurred since the Omicron variant emerged last year.

Chiefs-Eagles: How Kansas City could steal a Super Bowl LVII game plan from the Colts