Oncor wants to raise your electric bill. They made $229M last quarter.

Oncor wants to raise your electric bill. They made $229M last quarter.

Oncor says they need to raise rates due to record demand.

DALLAS – Oncor is asking to increase its rates, but a coalition of 169 cities is calling the rate request excessive and unjustified.

The 11% rate increase Oncor is proposing would cost the average consumer $6 a month more, which adds up to $72 a year.

This is happening while experts point out that Oncor already turned a large profit of $229 million at the end of the last quarter.

A Dallas City Council committee agreed with consultants and recommended that the full council join 168 other cities in denying Oncor’s requested rate increase. But ultimately, the final decision will come from the Public Utility Commission.

Ed Hirs is an energy economics professor with the University of Houston. He believes Oncor’s request doesn’t pass muster.

“Oncor has not made the case that the rate increase is required, especially after looking at the glowing report of their profits from the second quarter,” he said.

Oncor doesn’t make electricity or sell it. Instead, the company operates the power lines for distribution.

The company says its rate increase would bring in $251 million over current rates. On its website, Oncor says $47 million would go to cover storm-related and other self-insured losses with $75 million going to previous losses.

Oncor says it did make significant investments with $10 billion in updates to the electric grid since 2017.

FOX 4 asked an Oncor spokeswoman why the rate increase is necessary when the company’s revenue increased by $60 million in the second quarter. She explained that Oncor’s delivery charge is tied to how much electricity customers use.

“When you’re comparing 2021 to 2022, it’s important to note that this summer had record-setting heat and nearly a dozen new peak demand records,” the spokesperson said. 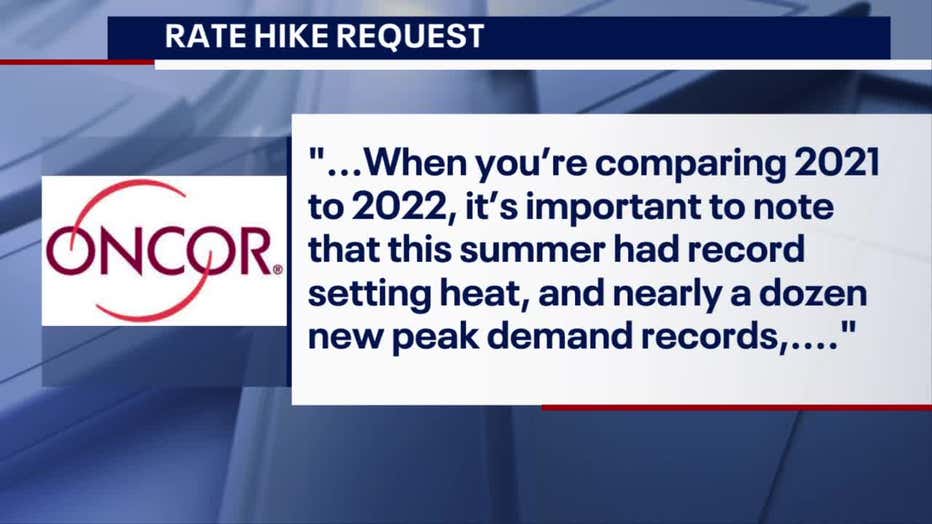 “The solution is, as the chair of the PUC says, we have to find a way to compensate generators to put steel in the ground. They haven’t come up with a plan yet,” Hirs said.

Oncor goes through this rate process every four years. This time around, it has been five years due to the pandemic.

The city is continuing to negotiate with Oncor. The case will ultimately be decided by the PUC.