The replay review of whether Blake Shapen’s pass was actually a lateral was significant at the time and even bigger two plays later in the second quarter of the Big 12 championship game.

Baylor eventually held on for a 21-16 victory.

Under pressure from the Oklahoma State defense, the Baylor quarterback unloaded the ball trying to avoid a sack. Shapen seemed to release the ball at about the OSU 21 with it landing at the 21 — a sideways pass that would have been recovered by the Cowboys.

But it was ruled a forward pass on the field and the call stood upon instant replay. Two plays later, Shapen found Tyquan Thornton on 13-yard touchdown pass for a 21-3 Baylor lead.

— Baylor’s fourth-down gamble which failed in the third quarter was not out of character. The Bears entered the game with 22 fourth-down conversions including eight in their own territory.

— Shapen’s 17 consecutive completions to start the game were both a Big 12 title game record and an AT&T Stadium record.

— Oklahoma State, which leads the FBS in sacks, added six against Baylor. Freshman Collin Oliver had two of those sacks to improve his season total to 10.5.

— Oklahoma State’s Korie Black had a big day on special teams. The sophomore defensive back from Waco got a piece of a 39-yard field goal attempt by Baylor’s Isaiah Hankins on the final play of the first half and then recovered a muffed punt early in the fourth quarter by Trestan Ebner. Oklahoma State eventually turned that recovery into a 20-yard field goal by Tanner Brown.

— Baylor right guard Blake Miller picked up his first reception of the season on a deflected pass on the final play of the third quarter. He was tackled for a 2-yard loss.

— Announced attendance for the championship game was 65,771, the second largest crowd since the return of the game in 2017. The Texas-Oklahoma matchup in the 2018 title game drew 83,114. 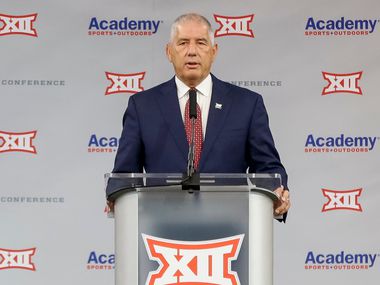 N.F.L. Week 4 Predictions: Our Picks Against the Spread

N.F.L. Week 4 Predictions: Our Picks Against the Spread