The Trey Lance Era Is Over (For Now) 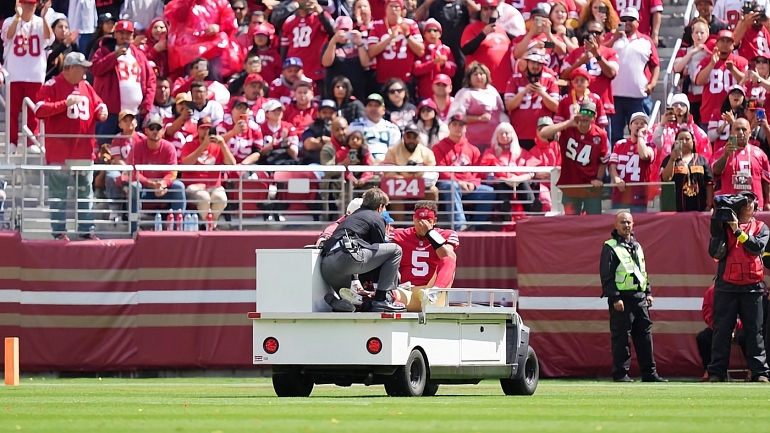 On Sunday, the San Francisco 49ers did something they’ve been striving for for over a decade – they dominated the Seattle Seahawks. For the first time since a young Russell Wilson stepped onto the field against Jim Harbaugh’s 49ers, San Franciso manhandled, outplayed, and frankly embarrassed the Seahawks.

Yet the loss they suffered overshadows everything they accomplished on the field. Trey Lance is out for the season, victim of a gruesome ankle injury that left him weakly attempting to reassure fans with a few laborious hand waves as he was carted off the field. Talk show lines that should have been full of enthusiastic celebration and unmitigated relief at the removal of the Seahawks as a perennial thorn in the 49ers’ side are instead thrumming with nervous energy about the fate of the franchise. For better or worse, the consequences of the blood that Seattle has drawn will ripple for years to come, just as Jimmy Garoppolo‘s fateful ACL tear in 2018 did and has continued to do so.

But unlike Garoppolo’s injury, the opposing team isn’t the only one that bears blame for this organizational setback. Lance, who has endured at least 16 hits in each of his starts thus far, suffered a season-ending injury on his third designed run of the day… 12 minutes into the game. There’s a world in which such aggression is encouraged, but not one in which Lance throws only two passes for every rushing attempt. Even Josh Allen, a modern-day NFL Superman whom Shanahan has often compared Trey Lance to, throws more than twice as often as Lance does. But Allen has already refined his throwing ability into a fearsome asset. Right now, Lance is a dangerous but inefficient passer. Yet instead of giving him the play-action rhythm and YAC momentum he’d receive from getting the ball into the hands of San Francisco’s legitimate receiving playmakers, Shanahan has sent Lance running between the tackles over and over again. Now, Lance will face the consequences of this design as he endures a long year of rehab.

The injury essentially punts Lance’s rookie season to next year’s, except then the leash will be shorter and the effort to find out what exactly the Niners have in Lance will be even riskier. And something like this, another season cut short with decisions simultaneously too aggressive and too conservative, will only set Lance up to fail. Next year, if and when Lance resumes the role of QB1 in San Francisco, how can we expect something like this not to happen again? The only saving grace in Shanahan’s plan could be that he wanted to acclimate Lance to the NFL against two weak defenses to start the year, inciting opponents to play in closer while expanding Lance’s passing options as the season hit its stretch. But if that was the idea, Shanahan didn’t seem to allude to it. He doubled down on his decision to send Lance into the grinder, lamenting only the injury itself. But Lance isn’t Lamar Jackson, and if Shanahan continues to employ Lance as though he is, then Lance will never fulfill his enormous potential in San Francisco.

Perhaps it’s too early to worry about what will happen next year when the current season has just begun. Garoppolo came in guns blazing, and nothing that happened in the subsequent three quarters left much doubt that the 49ers were the superior team in every respect. San Francisco is primed for another deep playoff run, although that is of course up to the unpredictable vagaries of the NFL season. But in a way, isn’t this the same conundrum that the organization faced with Garoppolo? For all of his strengths, there just wasn’t enough in him to carry the team to a title, so they sucked it up and made their peace with letting him go… until the price became right, of course. And if Shanahan can field a good team, call effective plays, but can’t quite develop a quarterback that can hang with the league’s elite, then perhaps he’s ultimately standing in the way of this team’s shot at a championship. But unlike Garoppolo, if Shanahan walks, he goes for good. There’s no chance he steps down to offensive coordinator when there are a dozen front offices that would jump at the chance to give him a head coaching role.

Despite his warts, Shanahan – like Garoppolo – has proven himself to be an effective part of a contending NFL team. But if Shanahan’s vision of a perfect offense involves running his quarterback down the opponent’s throat, it’s fair to question how far he’ll be able to take the Niners. He uses the run to set up the pass. That’s just who he is. But the great quarterbacks in the league – the hotshot upstarts like Mahomes and Allen, the seasoned surgeons like Rodgers and Brady – they all tear their opponents apart through the air. Mahomes and Allen can run, but those rushes are a counter to their ability to hurt you deep, and three designed runs for every play action shot downfield certainly isn’t that. Despite having one of the most talented teams in the league, the 49ers have made their future anything but certain.

Niners fans have been waiting so long for a real shot at perennial contention. They deserve that kind of team. But unless Shanahan evolves, it’s fair to wonder whether his tenure will be another “Close, but no cigar” in San Francisco.

The opinions within this article are those of the writer and, while just as important, are not necessarily those of the site as a whole.

The plot thickened in the ongoing San Francisco 49ers quarterback saga against the Seattle Seahawks on Sunday, albeit not in a way anyone expected or wanted to see.

Trey Lance opened the game at quarterback for the 49ers, as expected, but his first season as an NFL starter took a turn for the worse when he left the field due to an ankle injury he sustained on a

“And while I heard Lance was a little annoyed in the immediate aftermath, he’s a smart, mature kid who I believe can handle it,” Breer wrote, per NBC Sports. “Truth is, if he couldn’t, you might have bigger questions about where the Niners are at the position.”

That portion of Breer’s column has been edited since its

In his latest Football Morning in America column for NBC Sports, Peter King made several quarterback change predictions for the upcoming season. Among them was San Francisco 49ers quarterback Jimmy Garoppolo replacing Trey Lance before facing the Kansas City Chiefs in Week 7.

The 49ers have touted Lance as their starter all offseason, believing they would be able to trade Garoppolo. However, the former starting quarterback’s March shoulder surgery severely hurt his trade value, and he returned to the team on a restructured one-year deal to serve as Lance’s backup.

On Monday, the San Francisco 49ers held their first of four practices of the week as the team prepares for its regular-season opener at Soldier Field against the Chicago Bears. It was a bonus practice because of the lengthy preparation time between the last preseason game and Week 1. Typically, the team will hold three full practices leading to a game.

Several players spoke with reporters inside the locker room after practice. One of those players was wide receiver Deebo Samuel, who returned to the practice field after missing last week due to a knee contusion. He says he’s fine now and has no concerns about his Week 1 availability.